We – the Jonsson League – sail towards both local and distant shores in Rhumb Runner. On this website we tell you about our amazing sailing yacht, sailing, plans, trips, experiences, requirements for crew and especially about what we think is exciting.  If you want to sail as crew, even though we are not ready yet, check out the menu items Cruises, Plan, Crew and About Us. You can write us a short message in the Contact Us form and we will return as soon as possible.

The ship departs for distant shores from Vallensbæk, Copenhagen, Sunday July 3 2022, at. 9:53 am.

Until then, we sail with family and friends in the Nordic waters. 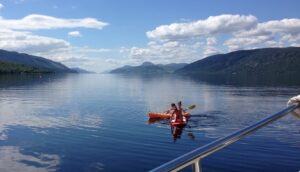 Yes, it sounds like the title of the Olsen Gang movie series - see Wikipedia. The Jonsson League is the Swedish counterpart of the Olsen Gang. There are also some similarities between today's Jonsson League and the fictional Olsen Gang. We have gang leader Egon, who throughout the winter makes plans, buys spare parts and new gadgets. When winter is over, the plan is presented to the crew Keld and Benny. Now, everything is timed and organized, fixed and finished. This year, the plan was a summer cruise to Scotland, through the Caledonian Canal and north to the Orkney Islands in new large sailboat. Egon expects Keld and Benny to show up at the right time and place -- and dare those who stumble in late or mess up the plan. But they do -- mess up and disturb the plan. As usual Egon becomes frustrated and calls them lousy amateurs, scumbags and porridge peasants or even worse things. Throughout the winter they have prepared the boat during every available weekend, sanding … END_OF_DOCUMENT_TOKEN_TO_BE_REPLACED 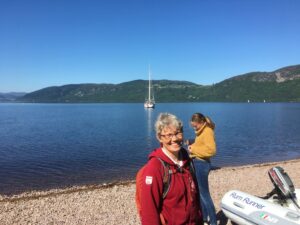 The Christmas present was a wishboard My dear sister Tine had a wish-board on her fridge and my wife Kirsten was inspired to give me one for christmas in 2015. I thought about my dreams and wishes for some days. As you can imagine, since my great passion is for sailing and keeping our sailboat fit, my thoughts circled intensly arround blue water ocean cruising and long distance sailing. What sailing yacht is suitable to bring us safely across oceans. The internet was therefore scrutinised and Yachtworld was searched for second hand sailing yachts and several YouTube sailing channels were visited and then followed. SV Delos sailed around on YouTube in a Super Maramu 2000 In particular, I was captured by SV Delos which was sailing around the oceans with the brothers captain Brian and senior Brady Trautman and later with Karin Syren alias Kazza, on board after New Zealand. They sail around in a strong and well build Super Maramu 2000 from the French AMEL shipyard, located in … END_OF_DOCUMENT_TOKEN_TO_BE_REPLACED

As skipper I have both ocean and coastal yachtmaster certificate. I have always sailed and have extensive knowledge of sailing, yachts, maintenance and technical stuff.

As skippers wife I have the coastal yachtmaster certificate. I keep a log of everyday life and experiences on trips. I'm interested in history and culture.

I am a crew member on board Rhumb Runner and I have extensive experience as a sea scout. I love craftwork and design.

For nurds & the Jonsson Leauge